Dijla Art Gallery is a prominent gallery in Baghdad specializing in contemporary Iraqi art.
Dedicated to encourage and promote art of Iraqi art pioneers as well as emerging and established artists working primarily in painting, sculpture, graphic and ceramic art.
Dijla is a unique gallery and event place with 12 viewing rooms and meeting spaces where distinguished art and architectural exhibitions are held in addition to other cultural activities such as lectures, open debates and musical performances.

Established in July of 1997, the gallery is situated in the heart of Baghdad's art district on Abu Nouas Street overlooking the river Tigris (Dijla) and based in an old family house built in 1932. The owner, has succeeded in introducing the viewer in this intellectually stimulating atmosphere with art that generates great interest and encourages creativity. As a result, the viewer has the opportunity to participate in an aesthetic experience and complete the dialogue that had begun by the artist.

The realization of this gallery had always been my dream. It took a long time to come true. The first tangible spark was in December 1993 when the Red Cross of Iraq requested my aid in creating a mural representing the birth of their organization. The mural had to be 9x3 meters so I needed spaces and help of other artists. Immediately, I thought of the old family home as the rooms are large enough and the atmosphere is so inspiring for the creation of this project. I could there conduct this art work and have the opportunity to once again sense the antiquity of the place while reminiscing.
Having spent about two months working on the mural, I became deeply attached to my home once again. Although the thought of refurbishing the large deserted home was immensely overwhelming, it was easier to bear than the thought of locking the doors once again. Finally, I have started the big task. It took a very long time as the circumstances were very difficult. Eventually, it was all over and was first inaugurated on the 7th of July, 1997.From that time on, we have succeeded in presenting exclusive art works and organizing many exhibitions in which some of them were very distinguished. I have realized that with the help and encouragement of friends, family and artists, namely the late Ismaeel Al Shaikli, Jamil Hammoudi, Dr.Khalid Al-Qassab, Dr.Nouri Bahjat, Nazeeha Salim, Nouri Al Rawi and the late Nazar Al Hindawi.
With many thanks to loved ones and the mentioned artists, not only did I live to enjoy the fulfillment of my dream but the gallery also gained its good standard and reputation. 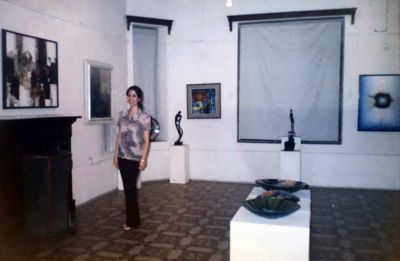 “ I have been in the art milieu for many years. To remain vital, I surround myself with exciting, stimulating art and seek challenges. I believe in good, continuous service, as well as honesty and reliability "

Designed and Powered by ENANA.COM